My Only Love Song is about an arrogant top actress (Gong Seung Yeon) who is transported back in time to the Goguryeo era where she gets involved with a legendary man (Lee Jong Hyun) who will do anything to make money.

My Only Love Song is a comedy drama that is light and easy and knows how to have fun.  This series was actually picked up by Netflix and is a quick watch with 20 episodes of about 30 minutes a piece.

Gong Seung Yeon plays our modern day actress Song Soo Jung. This girl has quite an abrasive personality, and she is so lively and animated. She really makes some great faces, and I found her to be a very entertaining character.

Lee Jong Hyun is our legendary man On Dal. He has a habit of swindling people to make money and frequently dresses up in disguise. Of course, he really has a good heart, and there is much more to him than meets the eye.

My Only Love Song is heavy on the comedy, especially in the beginning. It really plays up the fact that our heroine is from the future, and she sticks out like a fish out of water in this era. A lot of the comedy centers around just how out of place she is and that she doesn’t really try to fit into the time period. 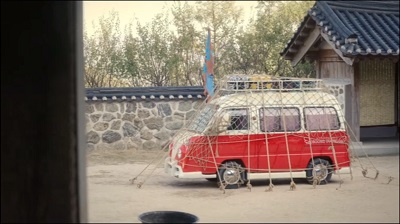 She also travels back in time in a very retro van. The reactions to the van by the people is varied and quite funny. The simple fact that the fan is present throughout the drama was very humorous.

The romance is also quite fun. Soo Jung and On Dal don’t get along at first, and there is a lot of entertaining bickering between the pair. Of course, feelings do eventually develop, and we get a nice little love story.

On the negative side, because of the heavy comedy element, it takes a long time to connect with the characters and feel any depth from the story. Something that is both good and bad is that the pacing is pretty good with each episode usually feeling quite breezy and moving right along, but that added to the difficulty in getting in deep with the story.

While the comedy elements definitely remain, things do get a bit more serious as the drama progresses. The story thickens as well as the growing feelings of the characters. This would normally be a good thing for me, but because of the previously mentioned issues, I found myself not to concerned with what was happening by the middle of the drama. It was too little too late. This left me feeling bored with it in the second half.

When it comes down to it, My Only Love Song is meant to be a fun and easy drama, and it is that for the most part. While it did lose its steam and initial appeal, I did enjoy several elements of it, especially for being a unique genre of being a very comedic historical drama.

Greetings! I’m Kay, creator and author of Kdrama Kisses. Kdrama Kisses is dedicated to bringing you the latest in kdrama casting news, drama trailers, reviews, and more. Happy drama watching to everyone!
View all posts by Kay →
This entry was posted in Reviews and tagged Gong Seung Yeon, kdrama, Korean Drama, Lee Jong Hyun, My Only Love Song. Bookmark the permalink.

8 Responses to My Only Love Song Korean Drama Review