Thank you for checking out my books! For the kdrama fan, I’ve got three ebooks that are collections of my Korean drama reviews from 2019, 2018, and 2017 available in text form (no images). I also have two teen fantasy ebooks if you enjoy fiction.

Any purchases would help support Kdrama Kisses, and I would be so grateful! All of the books are available for purchase on Amazon by clicking the links or book covers below:

Join me in exploring this ebook collection of over 30 drama reviews from shows that aired during 2019 so you can see some of the awesome television that South Korea has to offer! Hopefully, this book can help you decide what your next drama addiction might be or to relive an amazing drama right along with me.
$2.99 on Amazon

This ebook collection also has over 30 drama reviews from shows that aired during 2018.
$0.99 on Amazon 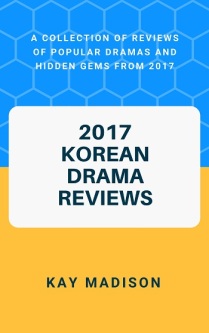 This ebook collection has over 40 drama reviews from shows that aired during 2017.
$0.99 on Amazon

Othinian: The Other Side of Fear (Book 1)

One Girl. One Choice. The fate of a kingdom will be decided.

When fifteen-year-old Alessa’s little brother falls deathly ill, her only hope of saving him is to make the difficult journey across the kingdom to find the evil King Natas who she has been told may have a cure.

Along the way, she meets an intriguing boy named Kaylan, and to her surprise, he offers to help her on her quest. As they grow closer on their journey, strange things happening around them lead to a terrible discovery: their entire kingdom may be in danger!

Can Alessa overcome her fears in order to save her family and make a critical choice that will determine the fate of her people?

Othinian: The Other Side of Fear is a teen fantasy adventure novel about the life changing journey of one girl whose simple quest to save her brother leaves her with the sole power to make a decision that will affect the entire kingdom.

Get Your Copy Here

Othinian: The Other Side of Courage (Book 2)

How do you choose between protecting the one you love or putting your entire kingdom in jeopardy?

With the kingdom finally at peace, Alessa and Kaylan have been helping King Jerrin to rebuild and heal the land. But with the return of a familiar face, their plans are put on hold.

The new life Alessa has built is threatened by the turn of events, and Kaylan is suddenly faced with making a terrible decision: protect the one he loves or risk the fate of his people.

Will Kaylan’s choice leave the kingdom in more danger than ever before?

Othinian: The Other Side of Courage is the second book in the Othinian series. It is a fantasy adventure novel that continues the journey of two teens as they struggle to save their kingdom and each other.

Get Your Copy Here

8 Responses to My Books