Seo Ji Hoon plays Lee Soo. He lived his life as a humble blacksmith and wanted to marry the woman he loved, Gae Ddong, but his life is turned upside down when he suddenly learns he is actually the King and is swept away from the life he once knew.

Gong Seung Yeon is Lee Soo’s love, Gae Ddong. She has an outgoing personality and is a bit rough around the edges. She also has a huge heart and just wants to find out what happened to Lee Soo as well as find her missing brother.

Kim Min Jae plays Ma Hoon. He is the head of the Flower Crew who are known as the best matchmaking agency in Joseon. He’s a very strict and no nonsense kind of guy, but Gae Ddong really shakes up his life. 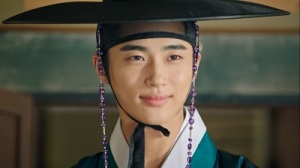 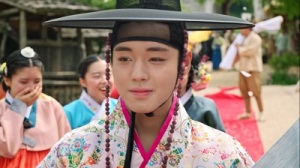 The other members of the Flower Crew include the handsome ladies’ man Do Joon (Byun Woo Suk) as well as the fun and fashion savvy Go Young Soo (Park Ji Hoon). Finally, Go Won Hee plays Kang Ji Hwa who is the daughter of a high ranking official.

Flower Crew: Joseon Marriage Agency was a great drama overall. It starts out pretty light with a lot of fun surrounding the Flower Crew. Nothing like a group of handsome men matchmaking to keep things interesting.

A solid story is quickly introduced too. We have several plot lines running throughout the drama with Lee Soo’s having to adapt to suddenly becoming king, a group of baddies plotting to control Lee Soo, Gae Ddong’s search for her brother, all of the escapades of the Flower Crew, a budding romance between Ma Hoon and Gae Ddong, and a couple story arcs that go deeper with the Flower Crew. Plenty of stuff to keep things exciting! 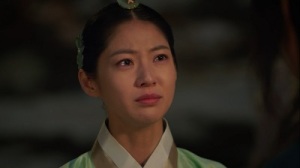 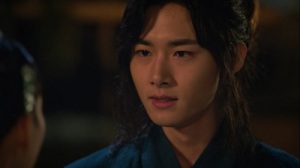 I thought they handled the multiple story lines pretty good as they all flowed nicely and came together well. This also allowed for a nice pace with things happening all of the time. I wasn’t as invested in the matchmaking stories, but they were still good and there wasn’t too many of them.

The overall production of this drama was also fantastic. The cinematography was great with a gorgeous color palate that combined with a really nice soundtrack which enhanced all of the scenes.

Really the only problem I did have was that I went into this drama thinking that Seo Ji Hoon was the lead, which he wasn’t, and that ended up not so great for me. He always seems like such a sweetie in his dramas, and this one was no different. Well, it turned out that Kim Min Jae was the lead, so I ended up with some serious Second Lead Syndrome!

They set up Lee Soo and Gae Ddong quite strong in the beginning, so I was all for them. Then when Lee Soo gets whisked off to become king, Gae Ddong is left to deal with the aftermath.

And that’s where Ma Hoon comes in. Now, I do also like Kim Min Jae, but he took a lot of warming up to in this series. He’s a bit of a stick in the mud who likes to play by the rules and doesn’t show his emotions. So it took some time for me to connect with him.

Kim Min Jae plays him wonderfully though, and Ma Hoon does slowly start to open up, especially as he develops feelings for Gae Ddong. I did also quite enjoy her with Ma Hoon since he was so supportive of her.

My heart still really wanted Gae Ddong to end up with Lee Soo though. I rarely feel this way about a character in a drama, but they just did him wrong! He’s a wonderful man, and he’s so good with Gae Ddong, then by no fault of his own, he has to go away.

SPOILERS: He does everything he can to make it back to her and find a way to still marry her, but she thinks he’s dead or has abandoned her, so she ends up moving on and liking Ma Hoon. Lee Soo’s little heart gets broken into pieces!

Plus, he actually makes a good friend in the palace that gives him a tiny bit of solace in the midst of his suffering, and then they go and kill her! This poor boy was just done wrong on so many levels! END OF SPOILERS

The stories involving the other main characters were done really well too. The one I was most impressed with was that of one of our Flower Crew, Young Soo. Because of his energetic and high maintenance nature, you wouldn’t guess he had such a sad back story. It’s actually surprisingly dark, and going more in depth with his past and what led him to where he is now was very emotional and heartbreaking. 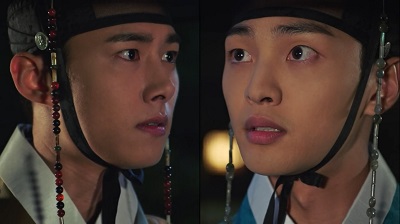 There are a few things that potential viewers of this drama should be aware of. It starts off light and then gets more serious as it goes with a bit more politics, but I thought they handled it well, and the last few episodes are very dramatic.

The love triangle is pretty prominent, and if you get on the wrong ship, you may be disappointed. This is also one of those historical dramas that takes a lot of liberties. Don’t take it too seriously. Fans seemed quite divided on this drama with a pretty equal love/hate split. Taste will likely majorly come into play with this one.

I quite enjoyed Flower Crew: Joseon Marriage Agency. Even though I didn’t love the direction the love triangle went, I liked the mixture of humor and serious and thought the pacing was good all the way through which is something I always appreciate. The story was solid and the characters were both interesting and entertaining. All in all, it was a very fun watch.