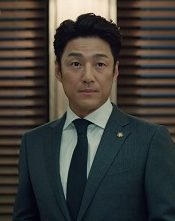 We have a potential leading man for the upcoming Korean drama remake of the American series Designated Survivor. Ji Jin Hee (Misty) is currently in talks to star in the show. He would take on the role of the Minister of Environment who ultimately becomes president. An offer is also out to Kang Han Na (Familiar Wife) for a lead role too.

The original series told the story of a politician who was the “designated survivor” and unexpectedly became president after a an explosion killed everyone else in the line of succession.

Designated Survivor is looking to air in the first half of 2019.

Greetings! I’m Kay, creator and author of Kdrama Kisses. Kdrama Kisses is dedicated to bringing you the latest in kdrama casting news, drama trailers, reviews, and more. Happy drama watching to everyone!
View all posts by Kay →
This entry was posted in News and tagged Designated Survivor, Ji Jin Hee, kdrama, Korean Drama. Bookmark the permalink.