My Holo Love is the story of a lonely woman with low self-confidence (Go Sung Hee) that falls for an artificially intelligent holographic man (Yoon Hyun Min) with the perfect personality who goes by Holo. Things get even more complicated though when the AI’s creator who looks exactly like him begins to fall for her.

Go Sung Hee plays Han So Yeon. Because she suffers from facial blindness, she has always distanced herself from everyone which has left her quite lonely. She happens upon a pair of high tech glasses that allows her to interact with an AI man which begins to give her some much needed confidence.

Yoon Hyun Min plays dual roles here as the AI man Holo and his creator Ko Nan Do. Holo is super sweet, charming, and playful. He’s perfect for getting So Yeon to open up. Nan Do on the other hand is reclusive and less friendly. Holo is his life’s work, and things become confusing for him as he begins to develop feelings for So Yeon.

My Holo Love was a nice and enjoyable drama. It’s the exact kind of story I’m into with the sci-fi/AI concept mixed in with romance. It’s a fairly straightforward drama with the main focus in the first half being on one woman’s relationships with a hologram and his creator.

Then the more serious plot running involving some bad guys coming after the AI technology begins to takeover in the second half. Tonally, the two halves of the series were quite different from each other, but the story had plenty to work with. Also, with only 12 episodes, the pacing was good throughout the series. 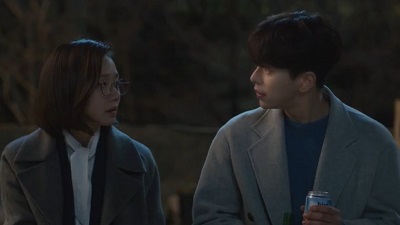 My Holo Love was a very touching story of a very lonely man and woman going on a journey of growth and realizing that they deserve to be loved. I loved Go Sung Hee in this role as she did really well at showing her character’s struggles and was very likable.

I enjoyed watching her journey of gaining self-confidence. It was nice seeing her begin to open up to Holo and laugh and be happy. I always love Yoon Hyun Min and was glad to see his playful side again here as well as him in a dual role as an AI hologram and his creator.

I really liked Holo a lot. He was so nice and always wonderful to So Yeon. He really was like the perfect boyfriend. Except he’s a hologram. Things eventually become difficult as she realizes her relationship with Holo has limits. She begins to question what he is to her.

I would have liked to have seen So Yeon develop her relationship with Nan Do a bit sooner. He’s around her here and there for the first half of the drama, but she doesn’t know who he is. Nan Do also has a cold personality, and he hides his feelings from So Yeon. So their relationship is definitely slow to blossom. 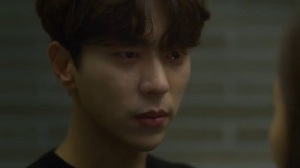 We finally gets some instances where he has to impersonate Holo, and we get real interactions between him and So Yeon. This is where their relationship really begins to take off. Once So Yeon finally finds out Nan Do has been impersonating Holo, she is understandably upset. It takes her some time to come around to him.

Then we learn that they actually share a very deep connection stemming from their past. It was interesting seeing how their present issues traced back to when they were kids. I really enjoyed seeing their relationship develop as they both began to heal from their traumas.

I thought the drama handled So Yeon’s relationships with Nan Do and Holo very well. The issues they faced were addressed, and So Yeon’s feelings made sense. I liked that Holo had a distinct personality and felt like a person in many ways. That’s how So Yeon and Nan Do treated him too. For those concerned about how a love triangle might work involving a woman, a man, and a hologram, rest assured that it is handled quite well.

Overall, My Holo Love had a lot of good elements. It had a great AI concept with interesting characters, personal journeys of growth, romance, and some baddies causing problems. It was a nice mix that kept things interesting all the way through.

Greetings! I’m Kay, creator and author of Kdrama Kisses. Kdrama Kisses is dedicated to bringing you the latest in kdrama casting news, drama trailers, reviews, and more. Happy drama watching to everyone!
View all posts by Kay →
This entry was posted in Reviews and tagged Go Sung Hee, kdrama, Korean Drama, My Holo Love, Yoon Hyun Min. Bookmark the permalink.