Extraordinary You is a fantasy romantic comedy about high school students (Kim Hye Yoon and Rowoon) who learn they are characters in a comic and decide to attempt to go against the plot and change their fates.

Kim Hye Yoon plays Eun Dan Oh. She is completely adorable as a sassy and energetic high school student with a lifelong heart condition. Her life seems normal enough until she one day learns she is actually a character in a comic. And to her dismay, she also learns she’s not the lead but just an extra!

Rowoon is originally a nameless extra in the comic, but he eventually takes on the name Ha Ru. He’s quiet and kind with some mystery surrounding his past. He teams up with Dan Oh to attempt to change the comic in an effort to better their future.

Then we have Lee Jae Wook as Baek Kyung. In the comic story, he is engaged to Dan Oh. He’s the bad boy type who strings Dan Oh along and is only with her because of pressure from his family.

Lee Do Hwa (Jung Gun Joo) is the perfect second lead in the comic that is as sweet as can be and is forced to always pine after Yeo Joo Da. Finally, there’s Jin Mi Chae (Lee Tae Ri) who is a cook at the school. He’s a man of mystery who seems to know a whole lot about the comic world and its inhabitants.

I have to say, I thoroughly enjoyed Extraordinary You! It was a bit of a surprise just how much too. Now I do I love stories that deal with meta things, and characters in a comic becoming self-aware fits the bill perfectly. But I really wasn’t sure what kind of story this would be or what tone it would have, and aside from Kim Hye Yoon, I wasn’t very familiar with most of the other main actors.

I was intrigued with the first few episodes, but it did take several for me to fully warm up to the show. But when I did, I completely warmed up to it and was all in!

Please note, I do talk about minor spoilers concerning characters who become self-aware and how the comic world works in this review.

Extraordinary You is a very easy watch. It is bright and fun with plenty of humor. The comic world is portrayed as a stereotypical romantic comedy, so that is ripe for all kinds of jokes to poke fun at the classic tropes we all know. 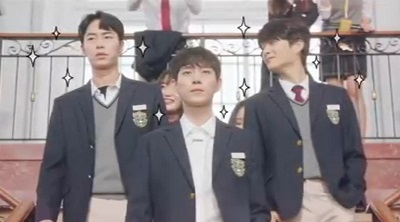 There’s the jerk male lead, the downtrodden female lead, the super sweet second male lead, mean girls, and the infamous A3 who are the most popular guys at school with all of the students swooning and cheering as they pass by. All of these tropes are played up to great fun.

When Dan Oh finally becomes self-aware, she goes through a lot of confusion and emotions. Not only does she find out she is a character and has no control over her own fate, but she’s not even the lead. She’s just an extra! She was then able to see how cringy the comic story and all of the parts being played were. 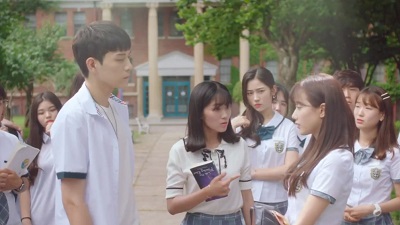 I loved delving into the rules of how the comic world operated. I thought it was really interesting how when a character became aware, they still had to follow the script set forth by the writer whether or not they wanted to. They were compelled to play out the scenes.

But when a scene ended, there was a space called the Shadow which took place in between the scenes. This is where the characters had freedom. And Dan Oh uses that freedom to try to change the story and her fate.

Dan Oh eventually takes notice of a mysterious student who keeps helping her. He turns out to be an extra who doesn’t even have a name and doesn’t speak. She is drawn to him and even gives him the name Ha Ru. The two begin their own adorable romance that very much goes against the real story.

I really loved Dan Oh and Ha Ru’s relationship. It was super sweet with plenty of heart as they struggled to beat the story and be together. But their actions have consequences as the comic world begins to change in unexpected ways. They have to face some major trials in their attempt to be together. Their love story was a great mix of cute fun and low-key angst. 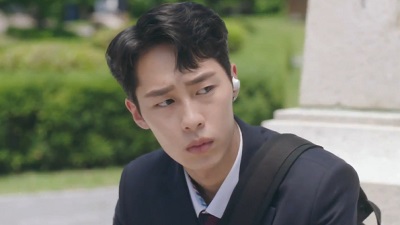 Then there’s Baek Kyung, the man that Dan Oh is engaged to in the story. I had a lot of conflicted feelings towards this character. He really is a complete jerk in every way and was always so mean to Dan Oh. For most of the drama, I just couldn’t feel for him.

Deeper in, we do see him soften some, and I felt like the drama wanted me to feel for him, but it really was a bit too late for me. I tried to keep in mind that many of his actions were written by the comic writer, but he was still pretty jerky even as his real self in the Shadow, so it was always hard to connect with him despite learning some of his back story and struggles. He’s definitely an interesting character though. 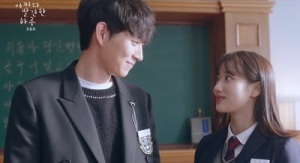 I got a kick out of the main comic story which had a love triangle involving Oh Nam Joo, Yeo Joo Da, and Lee Do Hwa. Their story was filled with all of the classic tropes which was quite funny.

The second lead, Do Hwa, eventually becomes self-aware. It was both humorous and sad watching him try to win over the lovely Yeo Joo Da. He actually really liked her, but his set-up prevented him from having a chance with her.

There’s a nice little mystery running throughout the drama too. The mysterious man Mi Chae seemed to hold the key to what was happening. We learn little by little what was actually going on and why things were happening. It kept things very interesting with some great plot developments.

Extraordinary You also had a very serious side as characters are really put through the ringer. They deal with separation, helplessness, and life and death stakes. Learning the back story behind the characters and the comic was really fascinating.

I loved that we got to go into the characters’ story in their previous comic which was set during historical times. It was like getting to see a past life story. The little bit we see had plenty of angst and really showed why the characters acted the way they did in the present, including why Ha Ru was so drawn to Dan Oh and wanting to protect her. I loved it!

Something to be aware of before going into this drama, as is common with many stories like this, is that not all of the questions are answered, and there are some plot holes. There are some finer details that are definitely not ironed out. 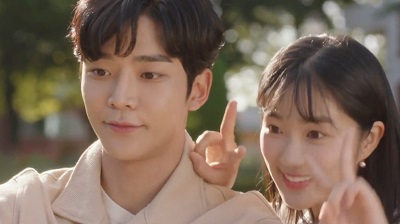 But I still thought the story was told well, and many of the themes presented in the drama were adequately addressed. We see characters become aware, try to change their fates, and accept their reality the best they can. I liked seeing the character progressions after they became aware. All of the characters who become self-aware eventually change for the better.

It’s a hard battle going up against an all powerful writer, but even when the characters had limitations, they made the best of them. Seeing their friendship, growth, independence, and determination was very inspiring. Dan Oh and Ha Ru in particular really fought for what they wanted in their lives, and no matter what they faced, they never gave up on each other.

Extraordinary You was enjoyable in every way. I loved the characters and the world that they inhabited. It was all kinds of fun with lots of heart. I had such a wonderful time watching it.

Greetings! I’m Kay, creator and author of Kdrama Kisses. Kdrama Kisses is dedicated to bringing you the latest in kdrama casting news, drama trailers, reviews, and more. Happy drama watching to everyone!
View all posts by Kay →
This entry was posted in Reviews and tagged Extraordinary You, kdrama, Kim Hye Yoon, Korean Drama, Lee Jae Wook, Rowoon. Bookmark the permalink.