Legend of the Blue Sea Increases in Korean Drama Ratings 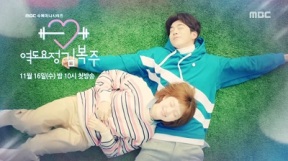 Legend of the Blue Sea saw a nice increase in Nielsen ratings this week. It brought in higher numbers than it’s seen in weeks by landing at 17.8% for episode 14 on Wednesday. It then rose to 18.3% for episode 15 on Thursday.

Oh My Geum Bi had a decent week bringing in 6.1% for episode 14 on Wednesday. It then brought in a series high of 7.2% episode 15 on Thursday.

Weightlifting Fairy Kim Bok Ju had an okay week too. It brought in 5.4% on Wednesday for episode 14 and 5.4% on Thursday for episode 15. These numbers tie its series high from a few weeks ago.

Legend of the Blue Sea had a great week. With a few weeks left in its run, maybe it still has a chance to break 20%. Next week we will see the finales of Oh My Geum Bi and Weightlifting Fairy Kim Bok Ju.

Legend of the Blue Sea airs Wednesday and Thursday on SBS.

Oh My Geum Bi airs Wednesday and Thursday on KBS.