Bridal Mask (also known as Gaksital) is set during the Japanese occupation of Korea in the 1930s. It tells the story of Lee Kang To (Joo Won) who is a Korean officer employed under the Japanese.  He is seen as a traitor by his family and Koreans, but he continues to work for the Japanese in hopes of making a better life for him and his family.

Things become difficult for Kang To when a mysterious masked man who goes by the name Bridal Mask (Gaksital) starts to cause him trouble by fighting the Japanese and protecting the Korean people.

Epic is the only word that I feel really sums up the masterpiece that is Bridal Mask.  This is one of my favorite dramas, and I have yet to come across another one quite like it. This drama is truly spectacular.  It is unique, complex, intense, and has some phenomenal acting.

Joo Won gives a completely captivating and engaging performance, and Park Ki Woong compliments him perfectly for a complicated bromance that is like none other.  This review will be filled with spoilers, so before I continue, I would just urge anyone who hasn’t seen Bridal Mask to give it a try.  It really is not to be missed.

During the first six episodes, we see a very cruel Kang To who will stop at nothing to get ahead and to catch Bridal Mask.  He is first pitted against Bridal Mask when he is trying to capture Oh Mok Dan (Jin Se Yeon), the daughter of a Korean patriot who the Japanese are trying to catch.  But Bridal Mask rescues Mok Dan from Kang To, and she soon develops feelings for the mysterious Bridal Mask.

We do see some of the softer side of Kang To in his interactions with his mother, brother, and friend.  His mother (Song Ok Sook) disapproves of what Kang To is doing, but it doesn’t deter him.

His brother, Lee Kang San (Shin Hyun Joon), was captured by the Japanese years earlier and suffered a mental breakdown that resulted in him acting like a child.  Kang To certainly had a strained relationship with him.

Kang To’s best friend, Kimura Shunji (Park Ki Woong), is a sweet school teacher who seems to keep Kang To somewhat grounded.  Shunji happens to be Japanese, and his father and brother are both officers in the military.  But Shunji just wants a simple, peaceful life.

Kang To continues to ruthlessly go after Bridal Mask, but things are turned upside down in episode six.  We recently learned that Bridal Mask is in fact Kang To’s brother, Kang San, and he has been faking his mental illness.  Even as Kang To tries to kill him, Kang San does his best to protect him.

But things go south when Japanese officer Kimura Kenji (Park Joo Hyung) kills Kang To’s mom.  As Bridal Mask, Kang San goes after the officer responsible and has a run in with Kang To.  And Kang To ends up shooting Kang San.  Kang San flees to his home, but is soon joined by Kang To.  Kang To is in for the greatest shock of his life when Kang San reveals he is Bridal Mask just before he dies.

A confused and distraught Kang To goes to look for his mother, but soon discovers her dead.  His whole family is suddenly gone.  This is one of the  most tragic scenes I have ever witnessed. And this moment from Joo Won as he expresses such raw and pure grief over his loss left me speechless.  What a talent.

Overcome with emotion, Kang To dawns the Bridal Mask himself and goes after Officer Kimura Kenji.  He tracks him down and ends up killing him…in front of his brother Shunji, none other than Kang To’s closest friend! But Shunji is left completely unaware that it was in fact Kang To donning the Bridal Mask. 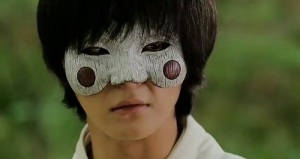 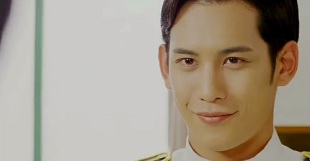 Both of our leading men’s worlds have been turned upside down, and their life paths are completely reversed.  Shunji finally joins the Japanese army with the sole purpose of taking down Bridal Mask, and Kang To continues to be Bridal Mask as he seeks revenge for the deaths of his family.

We now have one of the most complicated relationships I have seen in a drama.  Kang To slowly learns about the cause his brother was fighting for and eventually becomes a freedom fighter himself.  He truly embraces the Bridal Mask identity.  At the same time, Shunji’s anger and blood lust spirals out of control in his quest to find and kill Bridal Mask.  He becomes ruthless and a bit crazy.

Kang To continues to be in the army under Shunji’s command as a sort of double agent.  These two have so many serious and twisty moments!  It was so intense! Shunji continually misses catching Bridal Mask and discovering that he is actually Kang To.  And as he continues to go down his dark path, Kant To’s worst fear becomes that he will one day have to kill Shunji.

Mok Dan continues to hate Kang To, completely unaware he is now Bridal Mask.  Kang To pains the fact that he must hide his identify from her for so long. It makes for a very interesting relationship dynamic.

But she is in for quite the surprise when she eventually learns his identity after an intense fight and escape with him. She was certainly confused, but after realizing all Kang To had been doing, the two are drawn closer in their fight for freedom.

But Shunji also wants Mok Dan for himself, but she continually refuses him.  He becomes completely possessive and won’t take no for an answer.  But in many ways, Mok Dan is the final thing that allows Shunji to hold onto a shred of his humanity.  As messed up as his feelings are for her, in his way, he does care for Mok Dan. 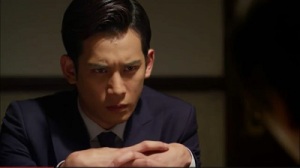 This drama has my very favorite bromance ever, but this bromance isn’t the feel good kind.  It is completely strained, and there are some crazy intense moments between Kang To and Shunji.  I was completely on the edge of my seat so many times.  Watching Kang To narrowly weasel his way out of being discovered so often was amazing.  And watching Shunji descend into darkness was both sad and fascinating.

Watching these two friends be pulled further and further apart was so heartbreaking.  And the final straw comes when Shunji finally discovers Kang To really is Bridal Mask.  Our guys would never be friends again.

I also really enjoyed the romance between Kang To and Mok Dan.  For the bulk of the drama, Mok Dan hates Kang To because she is unaware of him being Bridal Mask.  It made for a very fascinating dynamic.  And the big reveal between the two is intense. Then we finally get to see them able to care for each other as a couple. It was very sweet. 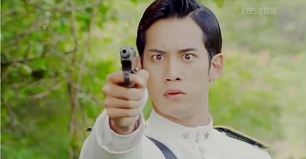 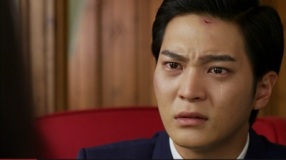 Kang To becomes a true hero, but in the end it isn’t enough to save Mok Dan.  On their wedding day, in a desperate attempt to kill Kang To, Shunji ends up killing her.  My heart broke as Kang To lost yet another person he deeply loved.

I think everyone expected an epic final battle between Kang To and Shunji.  But Shunji, after having lost everything including Mok Don, his best friend, his family, and being unable to stop Bridal Mask, just gives some parting words to Kang To, and then very calmly takes his own life.  Such a tragic end.

But Kang To continues on to fight the fight.  He continues to be Bridal Mask and fight for the freedom of the Koreans.  And after everything he had been through, that’s really all he had left.

Bridal Mask was simply breathtaking.  The story is epic.  The relationships were so complex.  And the acting by both Joo Won and Park Ki Woong was beyond words.  I have never seen another drama like Bridal Mask or seen such a complicated and intense relationship as was Kang To’s and Shunji’s.  Bridal Mask is epic and moving and should not be missed.