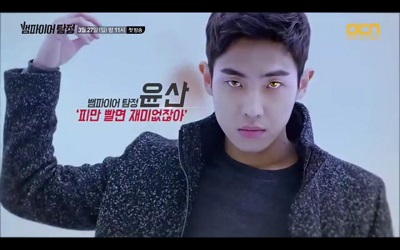 Episode 7 of Vampire Detective highlights another character this week, but yet again, it’s not San (Lee Joon)!  We get to know our villainess Yo Na (Lee Chung Ah) a little better by looking at her pre-vampire life, origin story, and how she became who she is now.

Let’s start with what I liked about this episode.  We spend a good chunk of time in flashbacks of Yo Na.  We see her as a regular teen girl with a crush on her neighbor, Young Kwang.  I found myself immediately perking up at the change.  We see the horrible incident that led to her being turned into a vampire, and then Young Kwang ends up becoming her protector.

He shelters her from the world and ends up becoming a killer in order to supply her with blood.  But after living this way for many years, she can’t take being locked away.  So Young Kwang eventually starts the organization that she is involved with now.  But the couple’s differences are too much too overcome.  He admits to blaming her for him becoming a monster.

In the present time, Yo Na recruits San to help her locate Young Kwang by holding his friends lives in her hands.  After spending the episode looking for him, Yo Na meets with Young Kwang.  He is now old and with Yo Na’ old friend. He doesn’t want to be part of Yo Na’s world anymore.  Outraged, Yo Na bites her old friend.  Young Kwang is able to illuminate the hall they are in and escape, and then San catches sight of his old police buddy alive and the episode ends with his pursuit.

So I really liked Yo Na’s story.  I wish we could just stay in those flashbacks for the rest of the drama.  Despite not answering several questions concerning how Yo Na and Young Kwang parted and how she ended up looking for him right then, that story was more interesting and what I wanted from Vampire Detective from the get go.

That’s where my negatives come in.  They showed us what Yo Na went through becoming a vampire and how she became the way she was.  Why couldn’t we have seen San experience his transformation?  What is he feeling?  How is it effecting him?  These questions should have been explored in depth already.

So while this episode actually featured a story I enjoyed, it just reinforces many of the elements that are lacking in Vampire Detective.  And the episode 8 preview looks like we are back to another stand alone case.  I just don’t get the writing for this drama.  Ah well, 5 episodes to go!