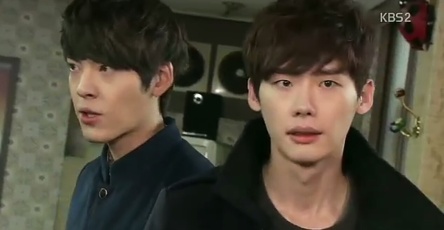 School 2013 is a high school drama about a student named Go Nam Soon (Lee Jong Suk) who attends one of the lowest ranking schools in Seoul.  Nam Soon tries to keep to himself, but is frequently bullied by Oh Jung Ho.  Two new teachers, Jung In Jae (Jang Na Ra) and Kang Sae Chan (Daniel Choi), soon become the co-homeroom teachers of Nam Soon’s class.  They struggle to help the students and deal with school politics.  A new student transfer, Park Heung Soo (Kim Woo Bin) unsettles the balance of power among the students, and we learn that he has a prior complicated relationship with Nam Soon.

Basically, I was very disappointed with School 2013.  It is an extremely popular drama that I had heard only rave reviews for, and I was also looking forward to the much talked about “bromance” between Nam Soon and Heung Soo.

This drama was filled with way too much mundane school stuff including repetitive teacher meetings/discussions in every episode.  I really didn’t care for teacher Kang Se Chan (Daniel Choi), and despite being a fan of Jang Na Ra who played teacher Jung In Jae, I found their interactions very repetitive too.

I was completely bored for a good chunk of the first half of the drama.  The students were a bit more interesting than the teachers, but I had a really hard time connecting with any of the supporting characters.

The personal lives of the students do get a bit more attention in the second half of the drama, which was an improvement for sure.  I was interested in some of their struggles, but for me it was too little too late.

Of course, Nam Soon and Heung Soo’s story was very compelling.  I would perk up every time they were on screen.  You could feel the tension between the two, and I wanted to know more and more about their relationship.  The problem was that they typically only had 10-15 minutes of screen time per episode for the first two-thirds of the drama.

And as they finally began to rekindle their friendship, there simply wasn’t enough of the “bromance” I was hoping to see.  That was such a disappointment.  I’m a huge fan of Lee Jong Suk, and I have loved everything else I have seen him in.  He was wonderful with what he did in the drama, I just wish I could have seen more of it.

In short, if the focus would have been more on Nam Soon and Heung Soo rather than the teachers and school politics, I feel like it would have been an amazing drama.  I can see what fans who loved this drama saw, the right elements were there, they just weren’t focused on enough for me.

Keep in mind, I’m in the minority on this one.  A lot of people love this drama, so you may just need to check it out for yourself.