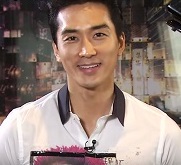 Song Seung Heon (Dinner Mate) has accepted a lead role in season 4 of the Korean drama series Voice. He will be joining Lee Ha Na (Voice 3) who previously starred in the first three seasons. Song Seung Heon will play a LAPD unit leader who joins the Golden time team while Lee Ha Na will reprise her role as a voice profiler on the team.

Voice 4 will follow the story of workers at a 112 emergency call center where a “Golden Time” team works to rescue crime victims in the golden window of time before they are likely to be killed.