High School King of Savvy is about a high school hockey player who ends up having to impersonate his older brother and go to work as a director at a company. While living a double life, he falls for a temporary employee that he works with.

High School King of Savvy was such a fun office comedy! It’s filled with quirky characters that always keep things interesting. Watching an 18 year old high school student suddenly be thrown into the corporate world was definitely entertaining. The romance is also adorable, and the love triangle was filled with tension. Fun to be had all around! 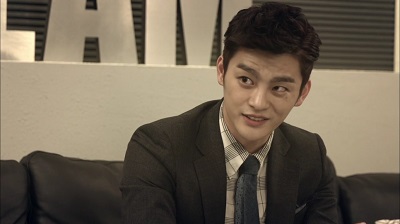 Seo In Guk wonderfully plays our lead Lee Min Suk. He gets put in the difficult position of pretending to be his brother. Of course, he is completely awkward when first arriving at the company and watching him have to wiggle his way out of being discovered was fun. 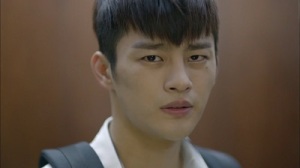 And Seo In Guk is completely hilarious! His comedic timing is impeccable, and he puts so much into his mannerisms and facial expressions. He really made me smile so much. But he also brings plenty of depth to the character, and he’s quite adorable as he falls in love.

Lee Ha Na plays Jung Soo Young, a temporary worker at the company. She is naïve and awkward socially, but she is as sweet as can be. I really got a kick out of her exaggerated facial expressions and how she would react to situations around her. She was just a fun character all around.

We have Lee Soo Hyuk in yet another second lead role as Yoo Jin Woo. But as always, he was wonderful and really brought this character to life. Jin Woo is the son of the company president, but that is a secret kept from everyone else. While he seems to have it all together on the outside, his family issues have brought him a lot of heartache.

As the object of Soo Young’s affections in the beginning of the drama, he makes up the third leg of our love triangle. In many ways, he is the villain of the drama and causes plenty of problems for both Soo Young and Min Suk. But luckily, he had plenty of depth, and it was easy to see that there was a nice guy underneath. His character journey was an interesting one. 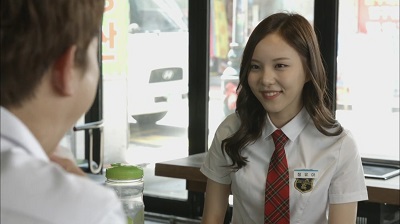 Lee Yeol Eum is Soo Young’s little sister Jung Yoo Ah. She goes to school with Min Suk and has a stalker level crush on him. I found her stalker behavior pretty off putting for a large part of the drama, but she does tone down, and it was nice to see her slowly mature.

Of course, I have to mention Min Suk’s best friends, Duk Hwan (Kang Ki Young) and Tae Suk (Lee Tae Hwan). I adore Kang Ki Young and always find him to be hilarious. And he definitely shined in this role. I also really enjoyed the close bond between the three guys. They have the kind of friendship we all aspire to have.

Min Suk and Jin Woo have the rivalry in the drama. Soo Young ends up caught in between them with her shifting affections. And Jin Woo quickly notices something off about Min Suk and is always working to discover his secret.

These guys have some serious tension between them, and it was so fun to watch. They played off each other so well. Sometimes their fighting was more humorous, and other times they had full on fist fights. It was always exciting with these two!

Min Suk and Soo Young made one completely adorable couple! It was so much fun watching them fall in love. And when they do become a genuine couple, they are as cute as can be! They are so cheesy in the best kind of way.

I just loved watching them be together. But they also really supported each other through life’s difficulties. Min Suk was always ready to protect Soo Young, and Soo Young always wanted the best for him. I really loved this couple. 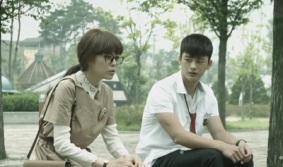 This drama is definitely a noona romance with a 10 year age gap between our couple. During most of the drama, Soo Young thinks Min Suk is 28, but in reality he is 18. I thought the drama dealt with the situation really well.

With a drama like this, we all know that at some point Min Suk will be discovered. And for Soo Young, that means learning that her boyfriend is actually a high school student. She is understandably shocked, hurt, and confused. But the drama does take time to explore both of their feelings regarding the matter and ultimately make a decision about their future together. 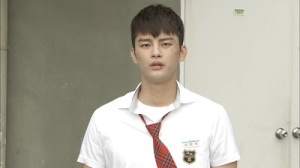 I have to say, I loved the ending! It deviated from the norm of most kdrama romantic comedies. I thought for sure there would be a time skip where Min Suk would leave and have a chance to “grow up”. But to my surprise, that is not what happened!

I found it very refreshing that neither of them had to go off and fulfill some other dream before they could be together. While I appreciate that some people have other things they want to accomplish before they get married, for some people, love really does come first.

For this couple, they were each other’s most important dream. Yes, they had other things they wanted to do, but they wanted to do them together. And even though their relationship was unconventional and seemed illogical, they defied the odds . They genuinely loved each other, and for them, true happiness started together. After that, everything else slowly came into place.

And they handled everything very responsibly. They talked through their doubts and concerns about their relationship, got permission from their parents, and then we actually got a lovely wedding between our happy couple.

We did eventually get that time skip, but it simply showed that they made the right decision to be together. Min Suk was going to school, Soo Young was doing well at her job, and the couple was still blissfully in love. What a beautiful love story! 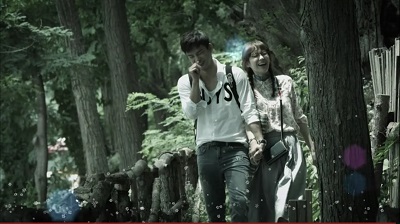 High School King of Savvy was so much fun overall. An adorable couple, a tense love triangle, and lots of humor made for an all around good time. It was an easy watch, and the romantic in me was very happy and satisfied.