The Crowned Clown follows the story of a king (Yeo Jin Goo) who fears for his life so he brings in a kind look-a-like clown (Yeo Jin Goo) to stand in for him.  As the clown tries to protect the throne and the people, he also draws the affections of the queen (Lee Se Young) who warms up to his improved personality.

I have really been looking forward to The Crowned Clown pretty much since it was first announced. A historical with Yeo Jin Goo in dual roles as a villainous king and a sweet clown is pretty much what I would want from a drama. It’s the best of both worlds!

First, Yeo Jin Goo plays King Yi Heon. He is a bit unhinged and lives in paranoia as his life is being threatened by unknown enemies. He gets a break when the clown Ha Seon takes his place, but even that it is not enough to keep him sane. 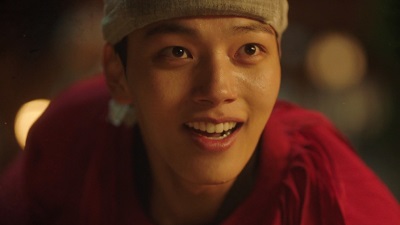 Yeo Jin Goo’s second and main role is that of the poor clown Ha Seon. He’s a good-natured man who cares for those around him. Although he is unwillingly thrust into the role of king, he takes the position seriously and wants to do what’s best for the people as well as his queen.

Lee Se Young is Queen Yoo So Yoon. She doesn’t love palace life and has kept some distance between her and the king, but she is a kind and mature woman who does her best as the Queen. When Ha Seon replaces the real King, she soon finds herself warming up to his kinder personality.

Then we have Kim Sang Kyung as the Chief Royal Secretary Yi Kyu. He is the one who instigates the switch between the King and the clown in order to protect the King. He is involved in many difficult situations as he tries to keep the secret and do what is right for the country.

And I have to mention our lovable Eunuch Jo (Jang Gwang) who is always right there beside the King/Ha Seon. He proves to not only be a major help to Ha Seon in learning how to be a king, but he also becomes a good friend to him.

Of course, no historical would be complete without our other various baddies. The top of that list would include the Left State Minister (Kwon Hae Hyo) and the Empress Dowager (Jang Young Nam) who are always scheming and causing trouble.

The Crowned Clown is a historical that definitely has a whole lot going for it. First, it had a lot to work with in terms of creating a rich and well-developed story. It starts with an interesting premise of a switch between the King and the clown and all that the clown has to adjust to in the palace.

There was also plenty of palace intrigue including someone out to kill the King. Of course, that means there was a fair amount of palace politics. I don’t love a lot of politics, so I did find some of it to be a bit slow, but most of it was pretty intriguing.

The production as a whole is excellent from the script to the direction. The cinematography was lovely and the background music was beautiful and chosen perfectly to set the mood of each scene.

All of the actors in the drama were just wonderful! Of course, Yeo Jin Goo is phenomenal as always. I knew the second he was cast that he would do ample justice to playing two very different roles. And he makes each character completely distinct.

He really sells the King who is a touch crazy. I was in awe of his intensity. He lives in constant paranoia while being addicted to drugs, and his temper is quite scary too. While he isn’t a very appealing character, his story that led him to where he is now is quite sad.

Count me as surprised that he ends up dying halfway through the series. I thought we would get some more conflict between him and Ha Seon especially because the scenes featuring them together were always so intense and emotionally charged. I definitely wasn’t expecting him to go so soon. His death scene was the time I felt the most pity for him as his fear really had driven him mad, and it was quite sad.

Then Yeo Jin Goo was just so sweet and kind as Ha Seon. I loved getting to see his bright smile and cheerful spirit. But his acting talents were also on full display in this role. Ha Seon goes through some incredibly difficult challenges. The turmoil he experiences both personally and while trying to be a good king is beautifully conveyed by Yeo Jin Goo.

Ha Seon goes through some serious difficulties. He’s forced to leave his loved ones to pretend to be king, he has to work hard to make sure he is believable, he falls for Queen So Yoon and has to deal with his guilt of deceiving her, and his life is on the line. There is just a whole lot of pressure and heartache for our poor clown!

Ultimately, he just wants to be a good King. He tries his best to understand the needs of the people and do what he can for them. This is what sets him apart from the real King and draws everyone around him closer to him. His warmth and caring are very clear and that is what saves him despite participating in such a big deception.

Seriously though, Yeo Jin Goo is just such a nuanced actor who has had talent well beyond his years since he was a child. He’s still very young, but he is one of the best actors around. Everything he touches is gold in my opinion. Fantastic performance! 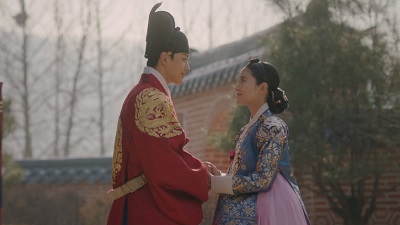 The romance between Ha Seon and So Yoon was just so sweet. She always kept her distance from the King, but after Ha Seon takes his place, his personality suddenly becomes much softer and more appealing.

Then she just warmed right up to his kinder personality while being completely unaware that he wasn’t the real king. This allowed her to fall in love pretty hard. I loved how Ha Seon had this adorable awkwardness yet was very much wanting to make her happy. The pair had this really lovely and comfortable chemistry.

Of course, she eventually starts to notice him seeming to act strange as he and the King switched places as well as when Ha Seon just seems different from the King she knew. Lee Se Young really did this character justice and brought to life the many emotions that So Yoon goes through from falling in love to having to cope the devastating truth about the King and the switch. She was just wonderful! 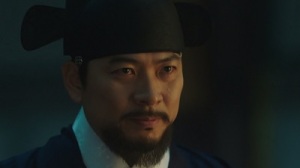 The other important relationship is that of Ha Seon and Chief Royal Secretary Yi Kyu. Things start off pretty tense between the pair, but Ha Seon has to rely on him to survive in the palace.

The Chief Royal Secretary takes quite a while to really warm up to Ha Seon, but eventually he sees just how good of a man Ha Seon is and how much he cares for the people. That allows the Royal Secretary and Ha Seon to have a much more meaningful relationship.

The Crowned Clown really tied everything together quite nicely with its talented actors, script, and direction to create a wonderful story that was filled with intrigue, romance, and heart. All in all, that makes for a pretty good historical.