What’s Wrong With Secretary Kim is a romantic comedy about the narcissistic vice president (Park Seo Joon) of a large corporation who learns his long time devoted secretary (Park Min Young) of nine years is going to quit her job.

Park Seo Joon plays Lee Young Joon who is the vice president of his family’s company.  He’s very narcissistic and doesn’t miss an opportunity to give himself some praise. Things are going along just fine for him until his world is completely turned upside down when his secretary decides to quit.

Park Min Young is his devoted secretary Kim Mi So. She is amazing at her job and is always ready and waiting to meet Young Joon’s needs. That is until she decides she wants a change and gives him her resignation.

Now, I was mostly in this drama for Park Min Young, and let me tell you, she did not disappoint! She always makes her characters so endearing and relatable while also feeling very strong. I loved her ability to “handle” Young Joon. She was just amazing to watch on so many levels.

What’s Wrong With Secretary Kim seems like it has been everyone’s favorite drama over the past few months. It brought in all kinds of nice ratings and was also a hit with international fans. The love for the drama was evident.

Now I didn’t fall head over heels for the drama like so many did, but I still liked it. It had a few issues for me, but overall I found it pretty enjoyable. First, onto what there is to love!

Park Seo Joon and Park Min Young are quite a treat as a couple. Their pluses are many and include a wonderful rapport between the pair. Their snappy bickering was humorous as was their awkwardness in navigating the change in their relationship.

These two are also very nice to look at and have a sweet chemistry. Many will appreciate that they have pretty good communication skills with each other and some nice kisses to get excited about. The relationship between the main couple is definitely the backbone of the drama and the reason to watch.

I think many people will also enjoy Young Joon’s character. At first, he seems like your typical arrogant rich chaebol, but he has some quirks that help with that. He is so narcissistic in an over the top way that makes him immediately humorous. And he’s actually got a pretty pleasant personality that is easy to warm up to. If you don’t like those typical jerk leads who need a lesson in learning how to behave, Young Joon is a great alternative.

There are some hilarious supporting characters. This is a drama where these characters add so much humor and don’t just feel like filler. You get to know these people at the office and enjoy their interactions, troubles, and romances.

My two favorites are easily Yoo Sik (Kang Ki Young) and Se Ra (Hwang Bo Ra). Kang Ki Young is always hilarious and enjoyable. And Hwang Bo Ra is an actress that I always wish I could see more of because she is so talented and funny. The faces she makes are absolutely priceless, and she was one of my favorite parts of the whole drama. 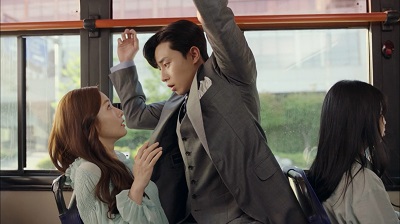 Onto the issues. Now I personally found the plot a little lacking in What’s Wrong With Secretary Kim. The focus at the beginning of the drama is mostly around Young Joon and Mi So’s changing relationship with just a few snippets of additional plot thrown in. It was fun, but I did find myself wanting to go a bit deeper.

Then we had a pretty interesting tonal shift around the middle of the drama. We have a little mystery to slowly peel back concerning Young Joon and Mi So’s childhoods. The plot thickens as we learn more back story and have some difficult issues for our characters to deal with. So that added a nice layer to the plot that I really appreciated.

I do still think the actual back story itself was a bit thin overall though. I wish we could have went much deeper and that it could have been spaced better throughout the drama. We ended up with very little in the beginning, a pretty decent middle, we had a huge info dump episode that wrapped things up, and then it felt like the last few episodes were mostly filler. This left me feeling pretty bored in that last quarter as all of the tension evaporated.

But for those who just like to see the main couple in plenty of cute scenes with some minor issues that get in the way each episode, this probably won’t be much of a problem. If you’re mostly in it for the romance, the relationship progression is solid, and the drama ties up everything in a lovely bow.

So despite the issues for me, What’s Wrong With Secretary Kim was a mostly fun watch. It checks the right boxes for a solid romantic comedy. We have a lovely couple at the center of the story, a little something extra to add to the plot, and a nice cast of supporting characters. All in all, there’s a lot to enjoy, especially for romantic comedy fans.