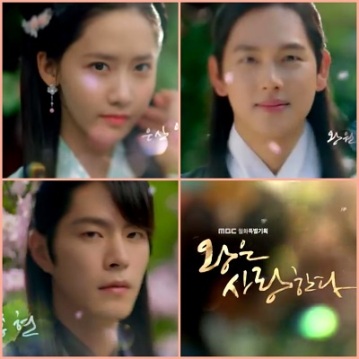 The King Loves is about an ambitious and conflicted crown prince (Im Shi Wan) caught in the middle of a huge power struggle in the Goryeo era.  He also falls in love with the daughter (Yoona) of a rich nobleman and ends up in a tragic love triangle with her and his close friend (Hong Jong Hyun).

Finally! A drama with a REAL love triangle! I know dramas with so called “love triangles” are a dime a dozen, but most of the time it is very evident who the main couple is and they usually only have real feelings for each other.

Not so in the King Loves! Our leading lady San has genuine feelings for both our leading men, Won and Rin. And since they are also close friends, things are even further complicated. It was the kind of love triangle I have been dreaming of seeing for a very long time now. 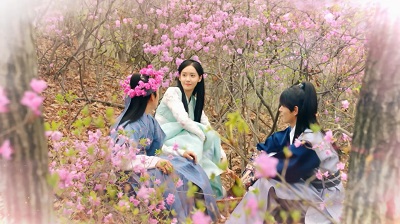 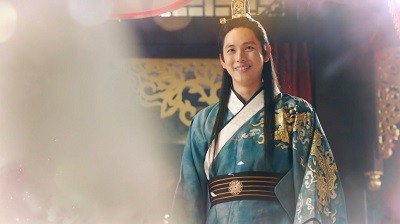 The King Loves is also a feast for the eyes! If you know me, you know I love the Goryeo era. And it has all of those stunningly beautiful costumes and perfectly maintained long flowing hair adorning the characters. The cinematography was gorgeous and showcased the setting wonderfully. This drama perfectly captures why I love the style of the era so much. 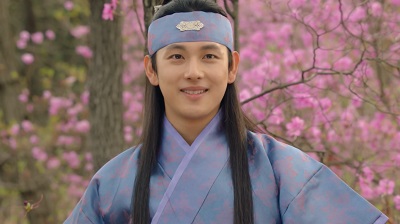 We have Im Si Wan as the Crown Prince Wang Won. He’s outgoing and confident and knows how to go after what he wants. He’s also never shy about his feelings for our heroine. But he struggles with his place in the palace and how he fits in. And he finds himself right in the middle of a huge power struggle that causes him to question who he can really trust.

Im Si Wan was great in this role and really added vibrancy to the character. Though I did find Won to be a bit off putting sometimes because of his somewhat aggressive personality. But he is also very patient and kind which brought balance to this. 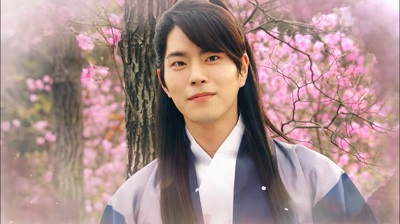 Hong Jong Hyun plays Wang Rin. He’s the best friend of Won as well as his right hand man. The two share a deep bond that they have had for years. Rin is loyal and selfless and always works to do what is best for Won.

I loved Rin so much! He was such a wonderful character, and it was refreshing to see someone not only be selfless, but also intelligent and very thoughtful in how he handled everything. I thought Hong Jong Hyun played him perfectly by adding so many subtleties to the character and making him feel so full of depth. 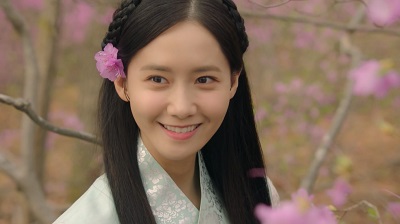 Then we have Yoona as Eun San. As the daughter of a the richest nobleman in the kingdom, she finds her life turned upside down by people who seek to gain control of her father’s wealth. This lands her in the middle of the power struggle as well as in the middle of a love triangle.

I thought Yoona was perfect for this character as it really fit her personality and abilities. San is also an independent but caring and sensitive woman. And when she finds herself drawing the affections of Won and Rin, one of her main concerns is not harming their relationship. She was a very solid character. 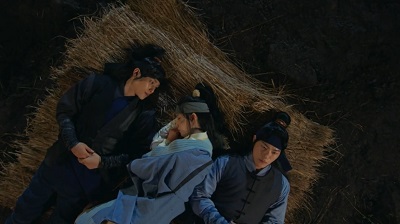 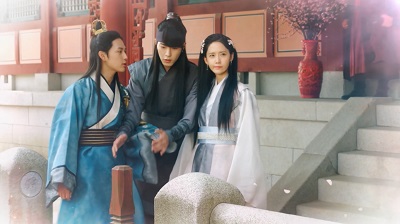 At the heart of The King Loves is the theme of friendship. I really enjoyed the early episodes where Won, Rin, and San developed a friendship that allowed for some fun as well as some entertaining adventures. If only those innocent beginnings could last.

There’s a lot of very interesting secret identity scenarios at play. San hides her status by pretending to be of lower birth. Won hides his identity as the Crown Prince, and Rin also hides his noble origins. It made for some very fascinating and ever changing dynamics between the characters. 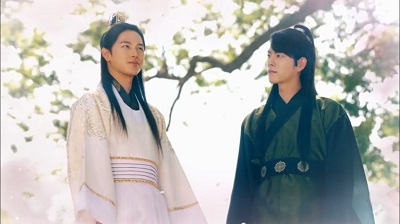 Won and Rin are the friendship at the center of things, and they have been close friends for years. They genuinely care for each other and have each others back. Of course, the dynamic of Won being the Crown Prince weighs the arrangement in his favor a bit.

But when the two guys fall in love with the same woman, well, nothing much good can come from that. And if that isn’t complicated enough in and of itself, there’s a lot of power dynamics at play.

Won already finds himself at odds with his father the King a lot and faces criticism for not being of pure Goryeo blood since his mother was from the Yuan Empire. Now add the fact that part of Rin’s family has been working on a play for power for years, and things just couldn’t get anymore messy. 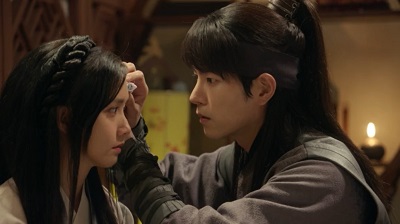 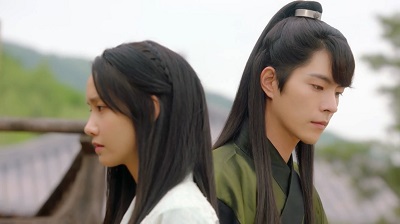 Let’s take a look at our two couples. I was hands down rooting for Rin and San. Aside from really loving Rin’s character, I thought Rin and San had tangible chemistry. They have a lot of stolen glances as well as those pained gazes of silence between them.

And when they got close, the romantic tension was thick. They are the definition of star crossed lovers because of their families histories as well as because of Rin’s loyalty to Won. I just relished in every little moment of their relationship. 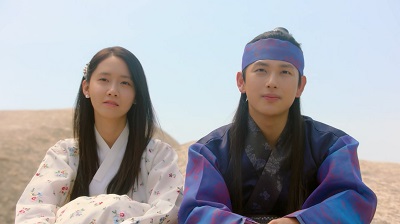 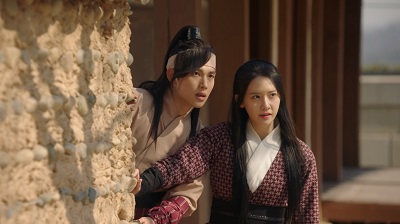 Then we have Won and San. Won doesn’t hide his feelings for San one bit. He’s bold in his attempt to win her heart. They bicker a lot, but San quickly sees underneath Won’s façade and sees the hurt inside. She is drawn to him because he is a good person, and she truly wants to be there for him and help him.

But seriously, this love triangle was impressive. I sure wish more dramas could write true triangles. And this love triangle was especially great because all three involved were also friends. None of them want to hurt anyone in the group. That makes it all the more painful as they each try to prevent that. But it seems to become more and more of an impossibility. 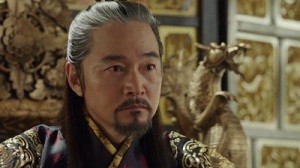 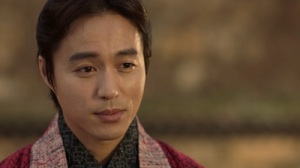 My only negative was that the power politics encompassed a bit more of the drama than I would have liked. But in this case, it was all more than worth it to watch as everything comes to a head in the last quarter of the drama.

The intricacies of the power battle were laid out so beautifully. There were so many characters working hard to gain that power and watching them carefully maneuver to execute their plan was impressive. It was all disheartening to watch as the good guys end up pitted against each other because of their plans. 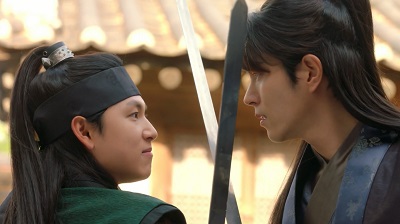 Of course, the main relationship effected is that of Won and Rin. This pair had such a wonderful brotherly friendship that was a truly beautiful thing. They already have to deal with their feelings for San, but things go to another level as a power struggle between the King, the Queen, and Rin’s family emerges.

Won and Rin’s friendship is continually tested especially as Won begins to question where Rin’s loyalty lies. This was difficult to watch as Rin is so loyal to a fault, and Won tries his best to fight off his suspicions. It was sad to see their relationship continually strained. 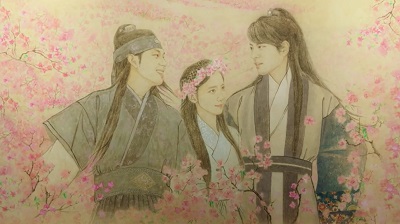 The King Loves maintained a wonderful pace throughout, and I was always completely interested to see what would happen next with the love triangle and the power struggle. All in all, it was an excellent drama packed with emotion. I’ll certainly remember the beautiful friendship between Won, Rin, and San that was at the heart of the drama.