Heartstrings is about a girl who plays traditional Korean music and a guy who is in a rock band. The drama focuses on students relationships on a college campus as they come together to put on a musical.

Heartstrings is a very popular classic drama. It’s been on my watch list pretty much since I started watching kdramas.  But sadly, it’s another popular one that didn’t click with me.  The number one thing a drama can do for me to dislike it is be boring, and this was on the boring side.  But all is not lost!  There were things I liked about it.

Let’s look at some of the pluses.  It’s really a lovely drama to look at with a really great laid back sort of vibe.  This is evident from the beginning which sets a nice mood for it.  The soundtrack is also wonderful.  This is a big plus because the drama features a lot of music between the performances and frequent music montages.  I enjoyed almost every song on this soundtrack.

And of course, Park Shin Hye!  I love this girl.  She plays Lee Gyu Won who is your classic sweet girl with a heart of gold.  She’s very self-sacrificing, but she will stand up for herself.  She’s a bit clumsy and humorous too.  I couldn’t help but like her.

I have mixed feelings with Jung Yong Hwa as Lee Shin.  I found him incredibly boring during the first third of the drama.  He shows hardly any emotion and acts like your classic jerk.  But his character does improve a lot in the second half of the drama.  He becomes much friendlier and shows emotion.  So he did end on a good note for me. 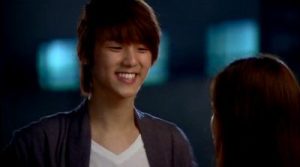 I also liked Kang Min Hyuk as Joon Hee.  He was all kinds of adorable.  His relationship with Hee Joo (Kim Yoon Hye) was pretty sweet.  But this girl works herself to the point that it is unhealthy.  We also see she has an extreme diet and bulemia.  It would have been nice if the drama had delved into that a bit.  But it ends up barely addressing the issue.

I liked the first episode, but then it got pretty draggy for a while.  The story seemed to crawl along without a lot of development.  Our main couple really didn’t get that much screen time together which took away what could have been a lot more of the fun bickering between the two.

I didn’t really care for the second leads either.  Suk Hyun (Song Chang Eui) and Yoon Soo (So Yi Hyun) had a lot of issues, and I felt like I was dropped right into the middle of all their problems before being able to connect with them in any way.  This left me unengaged in their troubles.  And things never improved with them.  While their relationship with each other quickly gets better, they ended up being one of the most boring couples I have ever came across.

I was getting pretty worried about the drama, but things shifted in episode 6.  All it took was for Lee Shin’s father to die. That event really affected him and finally brought out some much needed emotion.  It caused some self-reflection which through a chain of events finally leads to him taking interest in Gyu Won.

We get to see our couple finally connect and a sweet relationship blossoms.  The two join with the other students to put on the big college musical.  Different adversities come against them along the way, and they have to examine themselves and their priorities.

But this is one of those rare cases where I feel like the main couple got together too quickly.  After almost nothing in the beginning, they soon become a genuine couple.  And for the most part, they stay that way for the rest of the drama.  I think this is why I was bored even with them at times.  There wasn’t enough push-pull between them.

And the events coming against them from the outside were fairly minor.  There were plenty of sweet moments that I enjoyed between them, but I really would have liked to see a bit more conflict.

Heartstrings definitely had some pluses, but it also had a lot of negatives.  Park Shin Hye, Kang Min Hyuk, the soundtrack, and the vibe of the drama were all wonderful.  But Jung Yong Hwa, the second couple, and the lack of conflict resulted in a lot of boredom for me.

Yet I can definitely see its broader appeal among fans because it does contain so many classic kdrama elements.  And I imagine a lot of fans really enjoyed the main couple’s relationship because of how well they got along for so much of the drama.  So in the end, I’m glad I checked it out, but it will probably fade into the background very quickly.