10 Korean Dramas You Need to Be Watching in November 2016 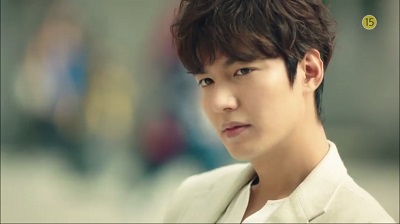 Here is the November edition of “Korean Dramas You Need to Be Watching.” This monthly series is meant to keep you updated on what’s happening in the world of Korean dramas so that you don’t miss out on anything!  We have a lot of new drama premieres for the month of November including a highly anticipated drama from a popular writer.

Here are the kdramas you need to keep an eye out for in November 2016:

1. Legend of the Blue Sea 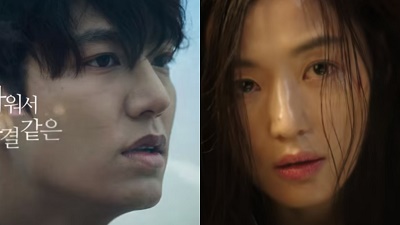 Legend of the Blue Sea is the latest drama from the popular writer of the hit drama My Love from Another Star. I absolutely love the story and the set up for this drama. It looks like it should be a great mix of comedy and romantic melodrama. Lee Min Ho and Jun Ji Hyun also look really great together, and I am really looking forward to the chemistry between the two. I am so excited for Legend of the Blue Sea on so many levels!

Legend of the Blue Sea is about a mermaid (Jun Ji Hyun) who goes to Seoul and tries to adjust to life on land. She meets a swindler (Lee Min Ho), and the two begin a romantic relationship.

Legend of the Blue Sea is scheduled to premiere November 16 on SBS. 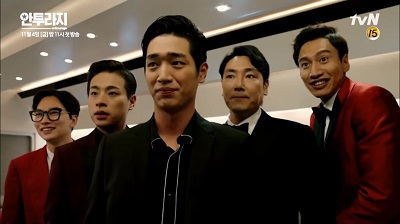 Entourage will show life behind the scenes in the Korean entertainment industry as a young man rises to fame with his friends and manager at his side. It stars Seo Kang Joon, Park Jung Min, Lee Kwang Soo, Lee Dong Hwi, and Jo Jin Woong.

Entourage is scheduled to premiere November 4 on tvN. 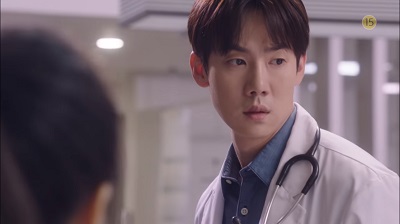 Romantic Doctor Teacher Kim is about a talented doctor (Han Seok Kyu) who lives as a recluse. He meets some younger doctors and becomes a mentor to them teaching them about love and life. Yoo Yeon Seok plays a man who became a doctor to best his rival while Seo Hyun Jin became a doctor to get recognition. 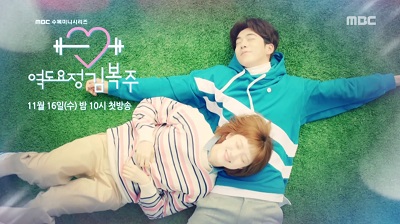 Weightlifting Fairy Kim Bok Ju is inspired by the story of Olympic gold medalist Jang Mi Ran. The drama tells the story of athletes at a college campus trying to achieve their dreams and experiencing love. It stars Nam Joo Hyuk and Lee Sung Kyung. 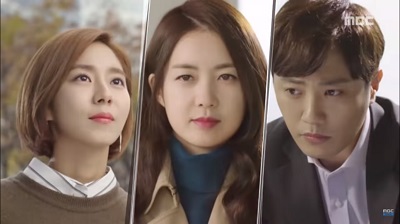 Night Light is about people battling against greed and ambition to become successful. It stars Jin Goo, Uee, and Lee Yo Won. The drama comes from the PD of I Miss You and Thank You and the writer of Last and Temptation.

Night Light is scheduled to premiere November 21 on MBC. 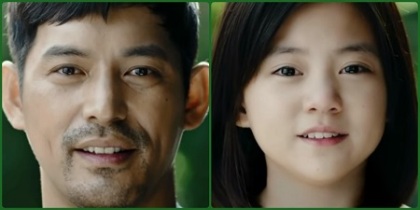 Oh My Geum Bi tells the story of a conman (Oh Ji Ho) who finds himself caring for the 10 year old daughter he didn’t know he had, but she has a rare disease known as childhood Alzheimer’s. He then meets a lonely woman (Park Jin Hee) who helps care for his daughter.

Oh My Geum Bi is scheduled to premiere November 16 on KBS.

7. The Man Living in Our House 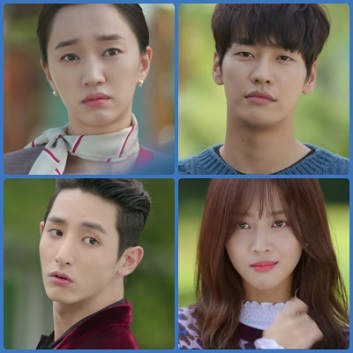 The Man Living in Our House is based on a webtoon about a woman (Soo Ae) whose life becomes a lot more complicated when a man (Kim Young Kwang) the same age as her turns up claiming to be her late mother’s husband, making him her stepfather.  She doesn’t believe him and then sets out on a mission to prove he is lying.

The Man Living in Our House airs Monday and Tuesday on KBS.

8. My Wife’s Having an Affair This Week 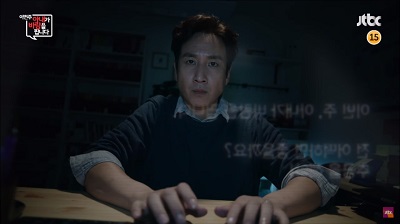 My Wife’s Having an Affair This Week is a comedy that tells the story of a man (Lee Seon Kyun) who suspects his wife (Song Ji Hyo) is having an affair and seeks help and advice on an online forum.

My Wife’s Having an Affair This Week airs Friday and Saturday on JTBC. 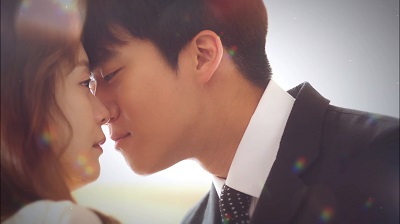 1% of Anything is a remake of the drama of the same name which came out in 2003 and tells the story of a rich chaebol (Ha Suk Jin) who finds out his grandfather has given away his inheritance to a teacher (Jeon So Min), and the only way for him to get it back is to marry the woman.

1% of Anything airs Wednesday and Thursday on Dramax. 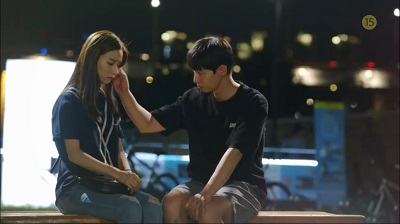 Our Gab Soon explores different relationships and families while dealing with traditional marriage, separation, divorce, and remarriage. Song Jae Rim plays a young man named Gab Dol whose family was poor as his widowed mother had to raise the kids alone.  She had hopes for Gab Dol’s future, but now he is unemployed and has failed the law exam multiple times. His long time girlfriend, Gab Soon (Kim So Eun), has been patiently waiting for 10 years for him to pass  so they can get married.

Our Gab Soon airs Saturday and Sunday on SBS.

AND SO YOU’RE UP TO DATE,
DRAMAS THAT WILL BE ENDING IN NOVEMBER: 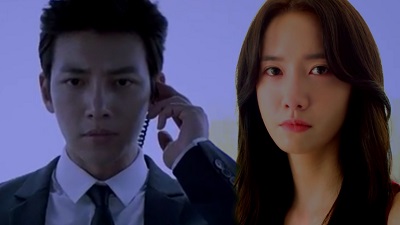 The K2 tells the story of a bodyguard (Ji Chang Wook) who is dedicated to his country but is tossed aside by it and is now out for revenge and a woman (Yoona) who is the secret daughter of a presidential candidate.

The K2 airs Friday and Saturday on tvN.

Shopping King Louie is about the last heir (Seo In Guk) to a chaebol who grows up alone in America and likes to shop. He ends up with amnesia and goes to Seoul where he meets a sweet country girl (Nam Ji Hyun). The two work to discover who he is while having to survive the city.

On the Way to the Airport 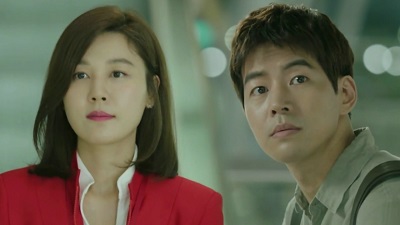 On the Way to the Airport explores the topic of whether men and women can just be friends.  Lee Sang Yoon plays a lecturer at a university married to Jang Hee Jin. Kim Haneul is an airplane stewardess married to Shin Sung Rok.

On the Way to the Airport airs Wednesday and Thursday on KBS.

Woman With a Suitcase 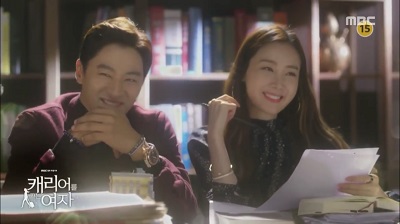 Woman With a Suitcase is about a woman (Choi Ji Woo) whose career is destroyed after a false charge which results in a prison sentence. She then has to work her way back to become a lawyer again. Joo Jin Mo plays a media company president who takes a liking to her and secretly helps Choi Ji Woo build her career back.

Woman With a Suitcase airs Monday and Tuesday on MBC. 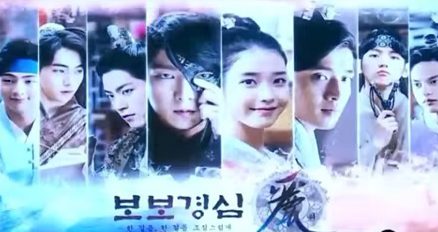 Scarlet Heart: Goryeo is a remake of the popular Chinese drama Scarlet Heart (Bu Bu Jin Xin) and tells the story of a modern day woman (IU) who travels back in time to the Goryeo era and gets romantically involved with several princes. 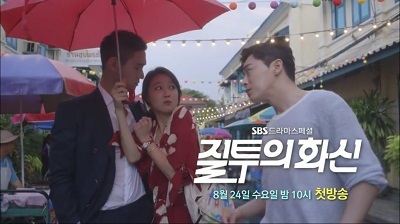 Jealousy Incarnate is a romantic comedy involving relationships at a broadcast news station.  Jo Jung Suk plays a macho star reporter with looks and brains with Gong Hyo Jin as a poor, temporary weather girl with a strong personality.  The two will face competition and jealousy on their journey to love.

So it looks like our November premieres include an epic romance, a bromance, an underdog story, and a few different styles of melodramas. I’m most looking forward to Legend of the Blue Sea, but I will also be checking out Weightlifting Fairy. We have a lot of excellent dramas wrapping up in November, so we will definitely need something to replace them!

What dramas are you enjoying or looking forward to in November?